It’s another national holiday centered around food, who makes these days? It’s actually a bit of a long story, here’s the skinny.

It all started in Sweden, interestingly not where waffles were founded. Waffles were founded in, you guessed it, Belgium! (Sweden and Belgium are about a 4 hour plane flight from each other.) Anyway, back to the delicious food… So waffles came to Sweden in the early 1600’s and spread to other areas. They didn’t smother them in syrup though, they ate them with jams and fruits. They ate them at all times of the day too! We can get behind that, right? 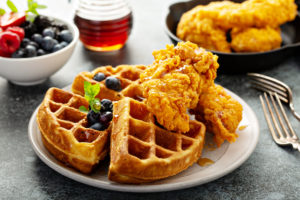 Well to celebrate them they created an event called “Våffeldagen” which sounded close to another word we can’t pronounce, “Vårfrudagen” which is a religious celebration. The two traditions ended up merged.

Of course, as time passed a wider variety of waffles were created, getting sweeter in the 1700’s. That’s when the butter and sugar was added which is close to the waffle we know and love.

So where did International Waffle Day come from? Because those two words sounded so similar, some mispronunciation merged the two holidays together. In fact, to celebrate the religious holiday, they eat waffles!

So as a clinic we obviously can’t recommend indulging in a food comprised of mainly sugar and carbs. So here’s a healthier option that tastes just as good! Another key point in not shooting your blood sugar through the roof…don’t DROWN your waffles in syrup. We know it’ll be tough, just try and measure it out to that serving size you ignore on the back of the syrup bottle.

We got this recipe from “My Weekly Meal Plans.”

Store: Refrigerate in air circulating container for up to a week.

Freeze: Fully cook, cool completely, and freeze in an airtight container for up to 6 months.

Reheat: Pop them in the toaster straight out of the freezer to heat up. You can also use the microwave if you’re wanting to get them a bit softer.

Walk-Ins welcome / Most insurance is accepted

The information contained in this site should not be used to diagnose or treat a medical condition. If you are concerned about your health or the health of a family member, please contact your physician immediately. Additionally, all links to external sites are provided as a convenience. Neitherr Bryan D. Barnes Inc nor it's representatives are responsible for any content related to external sites. To schedule an appointment with a provider from afm&wc, please contact our facility.